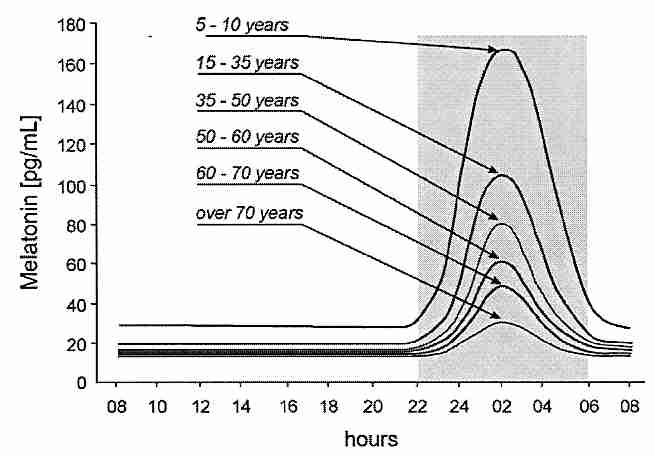 When are you Being Deficient of Melatonin?

Although elderly people often have difficulty sleeping and melatonin supplements have been shown to improve sleep in the elderly, melatonin secretion does not appear to decline in healthy older adults to a significant degree, despite many preliminary reports to the contrary.Most of these preliminary studies failed to verify that older subjects were healthy and not using drugs that suppress melatonin secretion (e.g., aspirin, ibuprofen, beta-blockers). Routine replacement of melatonin in elderly persons is, therefore, not recommended.

How much Melatonin is Usually taken?

In normal scenario’s, the body secretes melatonin for several hours per night—an effect best duplicated with time-release supplements. Studies using timed-release melatonin for insomnia have reported good results. Many doctors suggest 1–3 mg of melatonin taken one to two hours before bedtime. Studies with people suffering from sarcoidosis or cancer have used very high amounts of melatonin—typically 20 mg per night. Such levels should never be taken without the supervision of a doctor. Melatonin should not be taken during the day.

Melatonin and side effects?

Melatonin is associated with very few side effects. However, morning attitude, undesired drowsiness, sleepwalking, and disorientation have been reported. Researchers have hypothesized that certain people should not use melatonin supplements, including pregnant or breast-feeding women, people with depression or schizophrenia, and those with autoimmune disease, including lupus, at least until more is known.

In one study, the use of 3 mg per day of melatonin for three months resulted in a marked decline in sperm counts and a decline in sperm quality in two of eight healthy young men. In one of these two men, sperm count and quality became normal after melatonin was discontinued. Although this was a small study, it raises the possibility that long-term use of melatonin could lead to infertility.

In a group of children suffering from neurological disorders, 1–5 mg of melatonin per night led to an increase in the rate of seizures despite the fact that sleep improved. Until more is known, children with neurological conditions should take melatonin only under medical supervision.

Many other side effects have been attributed to melatonin supplementation, including inhibition of sex drive, severe headaches, abdominal cramps, and formation of rudimentary breasts in men.However, these associations have not been supported by solid evidence. Since none of these claims have been well documented or independently confirmed, these problems may not have been due to melatonin.

Though most research reports that melatonin improves the quality of sleep, at least one trial has found that four of fifteen men given melatonin had their sleep patterns disturbed by supplemental melatonin. Not something to worry about.

One case of painful gynecomastia (enlarged breasts) with elderly men has been reported involving a 56-year-old man who had been suffering from amyotrophic lateral sclerosis (Lou Gehrig’s disease), and was taking 1–2 mg melatonin per day for one and a half years. As the signs and symptoms disappeared after melatonin was discontinued, the authors of the report suspected that melatonin caused this side effect.

One-time oral administration of 1 mg of melatonin to post-menopausal women reduced glucose tolerance and insulin sensitivity when tested 45 minutes after administration. This finding suggests that people with diabetes should use melatonin with caution and only under the supervision of a doctor.